Calm After the Storm

Good heavens, what a weekend! We are all a little tuckered out like little Baby Moonface here. Who, by the way, was born at the last minute in the wee hours. Her mama and accompanying receiving quilt of Pegasus magic, caused me to break a good number of my sewing rules and to utter a few unpleasants upon discovering a dearth of stuffing material.

Any imperfections were overlooked and the sheer number of ponies and pony related items found under the tree were vastly more intriguing anyway. 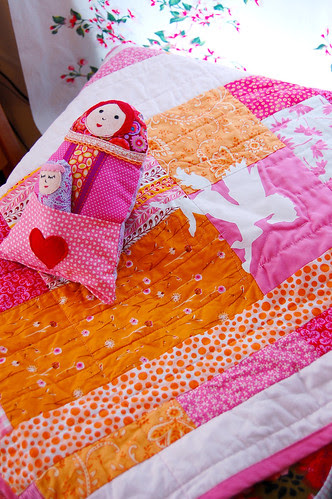 We had an amazing holiday feast with family. The Engineer and I joined forces to become a team of super chefs, creating a complete Middle Eastern vegetarian Mezza spread. Tabbouleh, Falafel, Fatayer (spinach pastry), Hummus...all from scratch, even the Pita were handmade. It was delicious! Yes, much feasting has been done! Our wee kitchen was put through it's paces and performed beautifully. Another night there was a roast chicken, mash potato, gravy with homemade rolls...not to mention the 6 dozen cookies made earlier in the week. I must admit, that never before have I had so many dishwasher fantasies. Still, unless we put one in the living room, I just don't think it's going to happen.

After all the hubbub, we have been soaking up a little lazy time. Pajamas have been worn long after the morning's gone, thankful for leftovers giving us respite from the cooking, and generally just hanging out as a family. There is a vague plan to motor up the mountain in search of snow play but, for now we are just letting it roll.
What have you been up to?
Posted by Lola Nova at 11:54 AM

Hello my friend! Your Christmas Feast sounds wonderful! We too had family and friends here for Christmas Eve and Day and good food was enjoyed by all!Oh, and i too, am still in my pajamas...ahhhhh...It feels good, doesn't it? I absolutely LOVE your new creations! Will you ever consider putting a few of your dolls in your shop???(pretty please???)

Lovely creativity, and the food sounds mouthwatering... we have made a locally-farmed chicken last for a total of 15 person-meals, so we are rather pleased with our credentials. My dad flies home tomorrow, all being well...

A little of the same here. Lots of different dishes brough in and lots of leftovers for just two of us. Still some celebrating to happen later in the week.
Peace and Joy in the
New YEar.

What a beautiful quilt. I know I say it every time, but oh for a little girl who could appreciate such things of beauty, not sure it would be the same covered in fanged monsters! You enjoy your pj time, there is so little of it in normal life.xx

LOVE the mama and baba!
It all sounds wonderful, especially the lazy daisies afterwards. I hope you and the gang are having a fab few last days of the year. X

What a beautiful quilt!
We've been enjoying life in much the same way, eating and lazing!!
Vivienne x

A very quiet Christmas for me, since Diane and baby Henry (sorry, Toddler Henry!) and the rest of my family are so far away. Spent a lot of time on the phone, though, talking to family and friends.

I wish I could timewarp us back to Diane's childhood days, when I actually sewed, knitted and crocheted. I would love to have had someone with your ideas as an example! She would have loved the mama and baby moonface dolls!!

I think there is a very happy Pony Girl at your house with the beautiful quilt and a momma doll with a new baby too! Sounds like plenty of happy tummy time also.

We had Christmas Eve at our house and I worked on the preparations up until the minute we left for our church service, even putting on my make up while Mr. B. drove.
Everyone came back to the house and we all had a grand time eating and enjoying the children with their new treasures. Christmas day was just the two of us with a rib roast and usual sides and I made my honey a pineapple upside down cake...Yesterday we drove back and were very thankful to get home in one piece..it was like driving through a carwash. But we were greeted by a happy cat and all 18 chickens so all is well.

Very quiet holiday for us. Our daughter and son both spent their Christmas with their significant others. Other than a few water works on Eve (me) everything was pretty normal in the morning and we caught a movie at IMAX. We had our big family get together the week before.

I love the little Pegasus quilt.

everything you amde is so great- including your middle eastern feast. Loads of left overs here too...

ooohh, would have loved to be at your vegetarian middle eastern feast, sounds amazing!
hope you get a few quiet days before the end of the year.
♥

For quite some time there, we were operating with our dishwasher in the laundry. But your feasting and celebrations and the letting-things-roll, are my idea of perfection - at least until clean up!

Life sounds quite perfect at your place! I love lazy jammie days, heaven! That doll & quilt are just beautiful, how clever you are...keep enjoying your down time xx

Oh it sounds like your holiday was lovely!!! Those homemade gifts you made are out of this world (I yell at my sewing machine too). They must be getting much love from Pony Girl :)

I think the post-Christmas quiet time is as important (for my sanity anyway) as the very-not-quiet time leading up to the day. Love that softie.

First visit to your blog - it's great! Look forward to following you (that doesn't sound right, but you know what I mean!) Abby