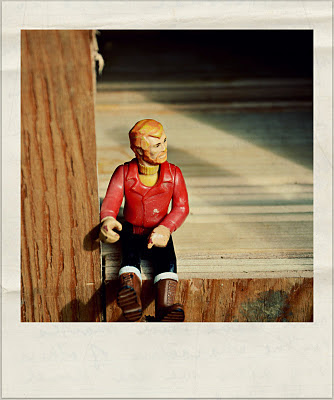 Hello Monday! Yes, it's time for another installment of the Lumberjack's amazing adventure. A long way from home, many trials and tribulations befell him, yet he keeps on keepin' on. That Lumberjack has got a lot of pluck!

If you need to catch up, or need a little reminder you can click here for the full scoop.

As you may recall, LJ was working a farm tending to the horses whilst being tended to by the lovely Farrah. Though it was a goodish life and he had no complaints, LJ still felt an itching to get back on the road to try and find his way home.

So the Lumberjack said a tender farewell to Farrah and walked on down the road. Since he was working for his keep, he didn't have too much money in his pockets; he decided his best bet was to hobo on a west bound train. He hopped a freight under the cover of night and made a pallet on the floor of a box car. He was soon lulled to sleep by the clickety clack of the train going down the line.

Somewhere close to dawn he was startled awake by a commotion. Just then he felt a hard kick to his soft underbelly taking the air right out of him. As he was gasping for breath the beefy arms of a railroad Bull lifted him up and tossed him out of the moving train! He landed most unfortunately with a knock to the head and everything went dim.

Most fortunately, the tracks bordered the property belonging to a commune of plant spiritualists, a group of which were out for a sun rise wild-crafting walk. They stumbled upon the Lumberjack and gently roused him from his unconscious state. They took him back to the main house, plied him with medicinal teas and discovered that the poor man was quite dazed and suffering from a bit of amnesia.

The group decided to give him the name of 'Nightshade' for the time being and told him he was welcome to stay as long as he liked.

Understandably, the whole situation was rather unsettling to the Lumberjack, but his nature was one of rolling with whatever life threw his way. He settled into the daily routines of the commune. He wasn't entirely sure how he felt about the commune's whole ethos, but they certainly did have a way with the garden.

Perhaps there was something in those teas, LJ or 'Nightshade' as the case may be, found himself spending time communicating with the plants.

One day during morning meditation in the healing garden, he began to get a few flashes of memory. Every morning after that more pieces of the puzzle began to emerge from the depths of his mind. It wasn't all there yet, but he could wait.

Meanwhile, he found peace tending to the gardens and having long pleasant conversations with the flora.

Email ThisBlogThis!Share to TwitterShare to FacebookShare to Pinterest
Labels: in the garden, story time, The lumberjack, toys

Oh no I do hope Lumberjack isn't losing his marbles....;)rxx

Oh boy, there must have been something very interesting in 'the brew'...hmmm. Can't wait to see if he gets all his memory back. xo

You can tell by the set of his jaw that he's a tough one.

The commune certainly knows how to grow pumpkins!

I like the sound of those teas! ;)
Vivienne x

another enthralling chapter in the story.
I just hope the commune is not in fact a cult....xo

This is a very strange but somehow compelling story.The kids are in school,Im off sick with cold lurgy and theres a box of playmobil on the shelf..Im feeling inspired!Thanks Lola