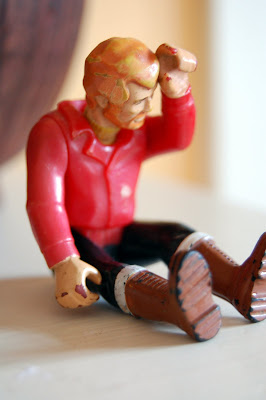 The continuing story of The Troublesome Dutch Girl and the Lumberjack...

When last we left our dear Lumberjack, he was aching with the despair of an unrequited love. Things were looking rather grim and frankly, I was beginning to worry about his emotional state. Just as I was about to organize an intervention on his behalf, he came to me to tell me of his plans. He had pulled himself up by his boot straps and decided he needed to get away for awhile to "sort things out alone," then he added, "I'm going to the coastal lands, to breathe in the briny air and clear my head."

So, off he went in his pineapple boat, paddling down river to the sea. Once he arrived, he stopped into a tavern and over a few pints, made conversation with a couple of the local fishermen. He told them he was in a bind and needed a job. After winning them over with a particularly clever and bawdy limerick, they sent him down the road where he was taken on by a small farm, thus beginning his shepherding career. 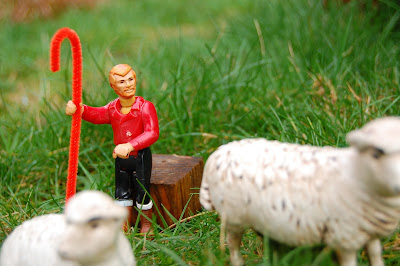 It was good hard work, walking the rolling green hills above the ocean, tending to his flock. Solitary and unencumbered by his past foibles, he breathed deep of the salty morning fog, cleared his mind and kept an eye on the bleating sheep in his charge. He kept his body to the task but, sometimes his mind would wander off, lost in thoughts and memories of a troublesome Dutch girl that had once captured his heart. 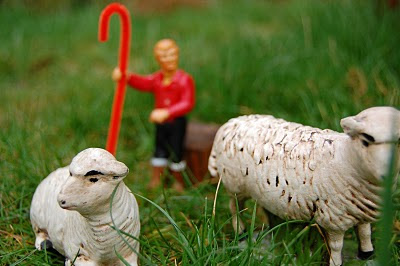 Over time, thoughts of the girl all but evacuated his mind, he started to feel robust and sound. His nights were spent in his bunk; reading books on philosophy, mythology and animal husbandry. After reading, he would douse his light and play harmonica till he faded off to sleep. On his days off, he worked to repair his boat, which had received quite a lashing on some rapids during his journey down the river. He decided to paint his pineapple a bold red to symbolize his returning passion for life.

After a spell, feeling hale and hardy...he knew it was time to go home. He packed up his rucksack, said goodbye to his friends and his flock, and headed back up river. It was a long journey back. Just as he paddled up to the shores of his home, who should he see but, the one and only troublesome Dutch girl! He had steeled himself for this moment...but wait, who is that there with her? It was a face he had never seen before. 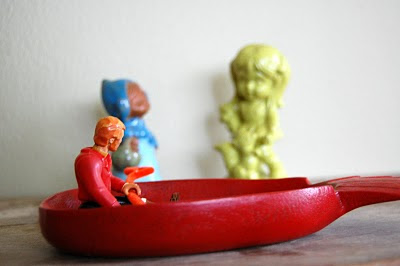 While the Lumberjack had been away, a new girl had come to stay.

As he walked towards them, The Troublesome Dutch Girl pretended she hadn't seen him, and began whispering conspiratorially to her companion. LJ wagged a brief nod in her direction but, quickly returned his attention toward the newcomer. 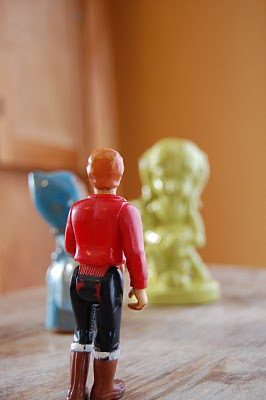 As he approached, the young maiden smiled shyly and said,"Nice boat." At first our Lumberjack was uncertain, for one of her eyes seemed to hold his gaze in sincerity, whilst the other seemed to look through and beyond him in a mocking manner. Still, he came closer and noticed a wee creature at her feet. It appeared that this young lady had learned to speak to the animals - and had tamed a wild beast to eat from her hand.

He held out his hand in greeting and said, "Well hello! I'm The Lumberjack, I've just returned home after a grand adventure, you must be new to our place." It seemed for a moment that she rolled her eyes in disdain but, upon closer observance he realized that she suffered from the curse of "The Wonky Eye". Surprisingly, LJ found that this did not detract from her charm, in fact, it made her all the more intriguing. She said, "Hi, my name is Fern and this is my pal, DJ P. Squirrely." As he reached out to give the critter a little scratch on the noggin, the Lumberjack looked up into the eye that seemed to be focused on him and said, "Your eyes are the most amazing shade of chartreuse." 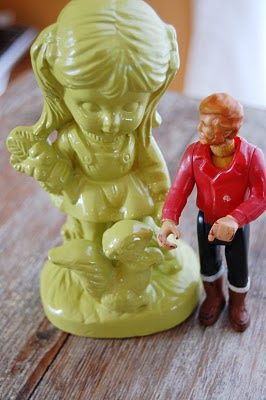 Fern giggled and said, "You know, I have my own doily." They walked away together, laughing and chatting in the crisp afternoon. And there, ignored and bitter, stood The Troublesome Dutch Girl...arms akimbo, a white knuckle grasp on her basket of broken dreams, spitting under her breath, "Well, I never!" 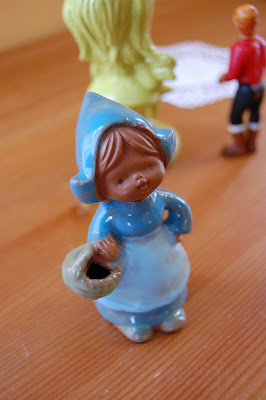 Is this the beginning of a new romance for our Lumberjack?
Is little Miss Wonky Eye as sweet as she seems, or are she and her sidekick hiding a deep dark secret?
Will The Troublesome Dutch Girl cause trouble?

Stay tuned for the next installment....
Posted by Lola Nova at 9:18 PM

Email ThisBlogThis!Share to TwitterShare to FacebookShare to Pinterest
Labels: random, The lumberjack, the troublesome dutch girl and the lumberjack

ohhh! Way to go LJ! Smooooooth; but you're right. I'm worried about Squirrely (never trust a squirrel, they'll eat your eyes). And I hope li'l mis dutchy has something strong in her basket to wash down a taste of her own medicine with!

You have outdone yourself this time my dear... although I would like to see this particularly clever & bawdy limeric of which you speak...!

From "...reading books on philosoph, mythology and animal husbandry.." and images of a snoring Lumberjack with his harmonica still fastened to his lips, playing the tune of sleep, to the lovely red pineapple boat, to the wonky eyes... it is all a grand and rather amusing adventure.

What DOES the next installment have in store for us?

For my money, that furry friend of our new lass shouldn't be trusted...

'tis true, only a lumberjack who has spent too many days and nights with the sheep could fall for those 'eery' starring eyes. i see bad times, i see sad times and i see possibly glad times ahead...

i'm on the edge of my seat and little olive is in her new abode, tucked up for the night in her suitcase, blissfully unawares that a passion is brewing between LJ and miss wonky eyes :)

Aargh! Will they, won't they, will she, won't she? I'm not sure how much of this I can take! Glad to hear that LJ has moved on from that dark place, though.

When a lumberjack's ok, doesn't that mean he's wearing ladies undies?...your lumberjacks trousers are incredibly tight yet there is no sign of a visible panty line, does that mean that he's actually a commando?...why is Miss Wonky Eye clutching what appears to be a head of broccoli?... is this what she used to tempt the squirrel from his acorns?... aren't clogs the prescribed footwear for a dutch girl?...if so why is the troublesome dutch girl wearing a rather natty pair of white sneakers?...is it normal/sensible to polish off half a bottle of red wine alone at your computer whilst laughing maniacally at the exploits of a group of gaily painted ornaments, before leaving nonsensical comments?...

LOL! waiting for the next installment!

Oh, I'm glad to hear LJ is recuperating from his broken heart, and I hope Ms. Wonky Eye treats him right. Love his freshly painted boat, too. Be strong, LJ, be strong.

Ahhhh! If I wasn't sitting with sleeping kids I'd be LOL. Too cute. :)

This is the first lumberjack installment i have ever read. Love it. What an amazing storyteller you are. Not sure that Little Miss Wonky eye is to be trusted though. Looks like she already gives all her love to the Squirrel. Can't wait to read more. xo m.

You, my lady, are brilliant. I will eagerly await the next nail-biting installment.