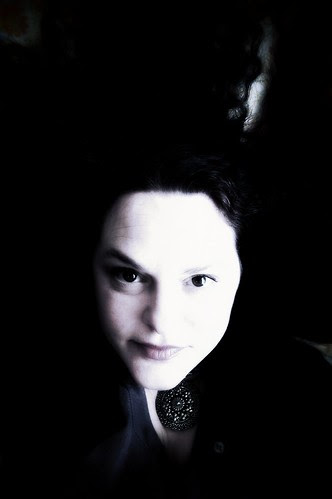 I'm back. After a number of issues with blogger, my camera, and a bit of overextending myself...I think I have put things to right again. I've gotten a little off track and so I'm starting fresh.

Remember my little "Self Portrait Challenge"? It's on again! These were taken in the first days of the new year. The first good look at myself of 2011. 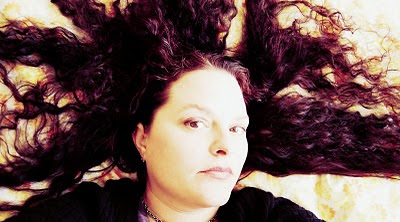 I had just dyed my hair a shade called 'Egyptian Plum'. When I told the Engineer over the phone he thought I had said 'Egyptian Slum', to which he replied, "That sounds awful!" So, now I am the mom at school pick up wearing what may or may not be pajama pants, and hair the color of an exotic Slum...which, if you're curious, is vaguely purple.

How about you, wouldn't you like to capture yourself on the precipice of a new year?

I'm off to see what I've been missing out there in blogland. I'll be back next week, with crafty bits and possibly to share a little secret I've been keeping.

Email ThisBlogThis!Share to TwitterShare to FacebookShare to Pinterest
Labels: getting to know me, self portrait challenge

Well at least it's an exotic slum!!! lol
I think it looks great!
Have a lovely weekend. :)
Vivienne x

Wow - those photos have such impact! I feel kind of washed-out, comparing myself... but that's not the point, is it? I MIGHT, might, might, be tempted to try an equally audacious self-portrait, although you couldn't tempt me to turn either slum or plum! You look fantastic, though.

Love the hair color!!! Self portrait project takes courage - something this New Year I may need to work on. Glad your back :)

I love it! Great pictures of you. I will have a go, I said I would & I will, it's just every picture i take of myself I look kinda crazy, really, just crazed...

You look fab! I think Egyptian Slum could be quite a cool hair colour - sounds exotic and bohemian!

Hello dear
Oh the photos are great - very Kate Bush style I'd say! I do think you're very brave with all this self portrait malarky!!
The hair colour sounds divine and looks it too - hey I'm all in favour of pyjama pants and egyptian slum hair ... he he!
And has the parcel arrived yet??? Surely the snow of December cannot still be holding things up??
Can't wait to hear your secret .... ooooohhhh....
D xx

oh how funny! i needed a good laugh :)
i understand...i'm usually the one at the school bus stop with blue or green nails ;)

I agree with Denise, Kate Bush leapt in to my mind. Beautiful pictures. Great to have you back.

Your photos are amazing and I love the purple, do you think they have that colour hair in the Egyptian slums? I love secrets ..

You look gorgeous! Plum is one of my favorite words! Say it, "plum". It sure looks good on you.

How lovely if they renamed hairdyes to less than exotic things, but they still came out looking as glowing ad wonderful as your hair.

The moment anyone mentions a secret, I'm immediately trying to guess what it might be. Very impatient me.
X

Back atcha Missus... I'm humming that Bangles classic 'Walk like an Egyptian'... my ears hurt!

I am excited to hear your surprise!!!

I didn't know they baked Plum Slump in Egypt, he,he. (I love the game where you whisper in someones ear and in the end it is all different).

Your hair looks great. Those locks would be gorgeous no matter what color.

Looking forward to you sharing your secret...I promise to not tell a soul.

Have a great weekend.

You know i think you are lovely....

I wish my hair color was something exotic like that... but I think it's just called #7 cool. Yours looks lovely.

Just popped over from Little House in Paradise. I browsed your 10/10 posts and think they are wonderful. Enjoy:)

Happy, happy new year you gorgeous thing you!
Can't wait to hear what you've been up to. XX

Well, Egyptian Slum is a fabulous colour, my dear ;)

Plum looks beautiful on you. You look very exotic and mysterious.

Welcome back, Slum hair and all! You're very brave to do the self-portrait thing, but then you're a beautiful woman so you just brighten the entire internet!

Well hello there Lola, that slum colour looks great on you, your blog looks just as great, I just have to follow you around! Looking foreward to next week :-) Have a nice weekend!

that egyptian slum looks amazing!! ;)
really love your self portraits, that top one especially.

nice to see you back and such exciting news! yay, you go girl.
looking forward to hearing more, yay!!
♥

love the portraits and love love love that you are back! :o)

After reading this post I clicked on your link back to the original post you did about self portraits and I thought it was great!

I especially liked: "It seems near impossible to not capture a sad, angry, or constipated look...and when you try to look happy or joyful, you merely come out looking insane." (so true!), AND, "I don't know how long the experiment will last, most likely until I discover that deep down I'm a narcissist and run away with myself..." (haha)

It reminds me of some 365 projects I've seen and I think I may do the same sort of thing with self portraits :)
All the best!!!