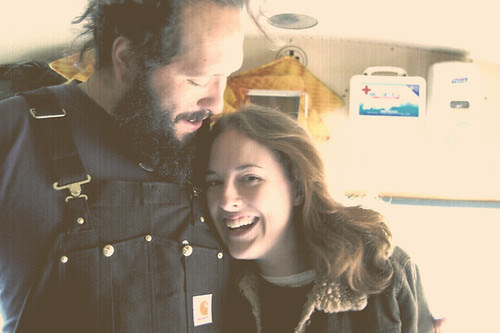 On Monday, I caught a rare glimpse of the elusive 'Snakegirl', she appeared out of the blue (as is often the case), with little warning, and I was awarded with a brief encounter with her. How lucky am I?
That would be my beautiful little sister and her partner 'The Bus Driver'. They were in town with the band and stopped by for a minute for hugs and stories. They drove their house over to my house. This is Buster, my sister's house. 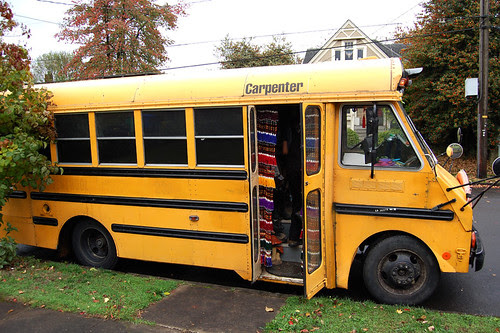 We hung out for a minute in her house, then they hung out in mine. I don't get to see Snakegirl as often as I'd like, she's been spending most of her time in Northern California on a piece of land, with the occasional trip for a band gig. 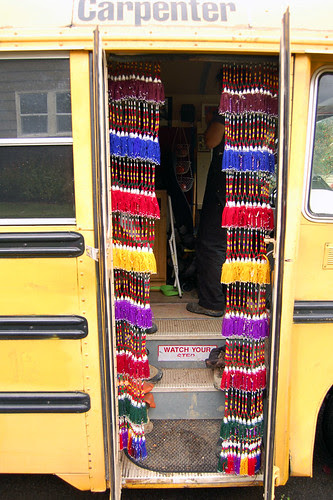 It was so nice to see her smiling face and catch up a bit. She's part gypsy, part snake charmer, part songbird, and all heart. I miss her already.

Safe travels my lovely sister, until we meet again.
Posted by Lola Nova at 8:00 AM

Email ThisBlogThis!Share to TwitterShare to FacebookShare to Pinterest
Labels: family

i am feeling all mushy inside now... so happy you got to spend a 'snippet of time' with your sister, her bus driver and buster.

until your paths cross again, may those few moments linger in your heart and your mind to keep you going :)

She is beautiful. Travel well, snakegirl

She sounds like a beautiful person that knows how to enjoy life.

That is the best house. Ever.

Your sister is beautiful & sounds fantastic! I'm glad you got to see her, if only for a little while.

I am so glad you got to spend time with your Sister! Family love is wonderful, isn't it?

What a beautiful girl - looks like creative talent runs in the family..

I always fancied living in a bus! How wonderful to be able to move on when you get fed up with a place - a bit like being a snail. And it's nice she came to see you, too, house and all.

she is adorable! awesome house too :)

I love how you have described her to all of us. Now I wish I could meet her, a lucky girl to have someone have such sweet things to say about her.

Being able to travel that freely must be amazing *sigh*. Your sister sounds like a fascinating & wonderful person.

Wonderful! I just had a rare chance to meet up wth my sister, too, and it was great!

Okay, this makes me feel old to say, but "Wow! She's all growed up!"

Wow...amazing bus and very amazing sister...Is there a reason for the name....It it a band name or something...I am intrigued...